Menstrual cycles: how much do you know? 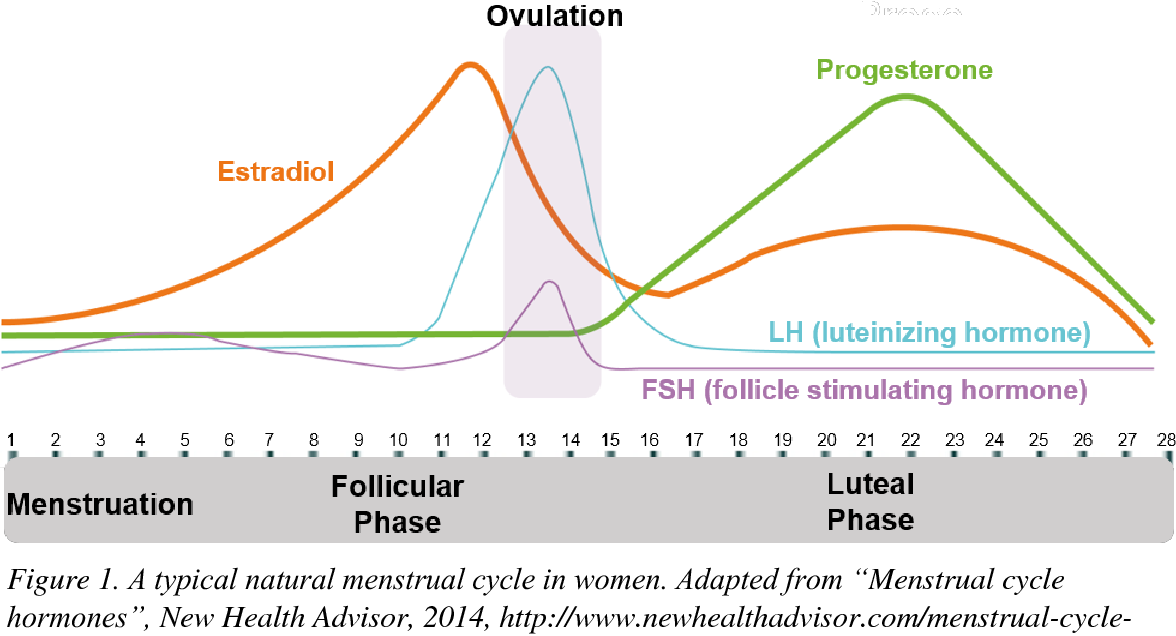 How much do you actually know about what your hormones do during your menstrual cycle? And what is considered normal?  I find many women are surprised to learn how much their hormones can be connected to how they feel throughout the month and how much they can learn from tracking their symptoms and cycle.

What is a normal cycle?

For healthy women a menstrual cycle is roughly 4 weeks long.  Periods should be 2 to 8 days long, with the average being 4 to 6 days.

Day one is the first day of bleeding – you count your cycle from this day until your next period.  24 to 35 days is normal even though birth control typically uses 28 day cycle.

Ovulation should happen 14 days before your next period.  Technically women are only fertile for 24 hours after ovulation, but semen can survive for up to 5 days in a woman’s body which extends the fertile window.

What actually happens during a woman’s “cycle”?

If we assume a 28 day cycle, this is what you should expect over the month:

DAY 1 is the beginning of the follicular phase – named because this is when your body is creating  a follicle in the ovary from which an egg will be released (ovulation). This phase is usually 12-16 days length.  During your period both estrogen and progesterone are low. Women often experience fatigue during this phase, at least partly due to the low estrogen.

DAY 4 to 5 estrogen should start to rise. FSH (follicle stimulating hormone) – named because it stimulates egg follicles to develop – rises during the follicular phase.  Many follicles grow initially, but one will become dominant and eventually will be released. Mature follicles produce estrogen – which is why estrogen starts to rise during this time. As estrogen rises women experience more energy and less irritable.  Verbal skills and memory improve, learning is easier and motivation may increase. Estrogen also has a slight appetite suppressing effect. Eczema, asthma & IBS can flare up when estrogen low. Estrogen triggers increase in endorphins for pain.

Around DAY 10 estrogen increases dramatically and progesterone will slowly start to increase from the follicle. The increase in estrogen is what stimulates the production of fertile cervical mucous (eggwhite or watery consistency) prior to ovulation and boosts libido.  If you aren’t noticing any fertile mucous it can be a sign your estrogen is low. The opposite is also true – a lot of mucous or for an extended time (longer than 3-5 days) can be a sign of high estrogen. The rising estrogen is also what signals the uterine lining to thicken.

The rise in estrogen also thickens the lining of the urethra.  Low estrogen makes women more prone to urinary tract infections. Estrogen also contributes to keeping pelvic floor muscles strong – so low estrogen can worsen bladder, uterine or bowel prolapse. Postpartum / breastfeeding and menopause are times women are naturally lower in estrogen and the most common times for prolapses to flare up.

DAY 8 to 14 estrogen & testosterone rise until they peak – mood & energy increase, you may feel more social and adventurous, more confident & coordinated, and experience increased libido.  This is at least in part due to estrogens relationship with serotonin (the ‘happy’ hormone) – estrogen helps stimulate serotonin production AND increases serotonin receptor sensitivity. For some women who are sensitive to estrogen they may feel more stressed or anxious due to estrogen excessively stimulating their brain during this time. On DAY 12 to 13 estrogen surges and levels may quadruple before falling back down. This surge is a signal for ovulation which happens 24-36 hours later.  Estrogen also stimulates LH (Luetenizing hormone) to rise. The LH surge is what triggers ovulation and is what ovulation strips from the drugstore are testing. After ovulation LH and estrogen levels drop.  The drop in estrogen will also cause your cervical mucous to dry up (a sign you are no longer fertile).  Testosterone rises during the later part of week 2, which boosts libido even higher.

DAY 14 the egg is released and the crater left by it becomes what is called a corpus luteum. This is the start of the Luteal phase (named after the corpus luteum) which starts after ovulation and prepares uterus for implantation.  This part is less variable than the first half and should be 13-14 days long.

There are TWO estrogen drops per cycle – first after ovulation (first half of week 3) and then again premenstrual (about halfway through week 4 until period).  Menstrual migraines & headaches are often caused by drops in estrogen both around ovulation and premenstrually. The drop in estrogen also makes women feel more cynical, pessimistic and critical – which is often expressed as anger and irritability.  The drop in estrogen also pulls down serotonin which leads to carbohydrate cravings (breads, sugars, pastas, etc) because carbohydrates help raise serotonin. Symptoms of PMS can be experienced during BOTH drops.

DAY 15 to 22 – progesterone begins rising while estrogen & testosterone drop in the first half of the week. Later in the week estrogen will begin rising again – which can help mood and energy start to level out again. Both estrogen and progesterone will peak about 7 days later (day 20-22, which is why hormones are best tested on Day 21).  Progesterone is a sedating hormone – higher levels make women feel more tired, calm and cautious. For women who are sensitive to progesterone, they may experience weepiness or sadness during this time and brain fog.  Libido is generally lower during this time, but women may still crave affection (more cuddles and handholding).  Progesterone also slows down digestion (possibly to increase nutrient absorption for pregnancy?) and can make women more prone to constipation.

Progesterone makes your body less sensitive to insulin.  This can contribute to women experiencing increased appetite and carb cravings during the second half of their cycle.  You may be more sensitive to skipping meals, drops in blood sugar and feeling “hangry” during this time of your cycle.  Progesterone can also make skin and hair more oily and prone to breakouts and increases water retention and bloating.

If pregnancy does not occur, these hormones will fall and be low by DAY 28.  The symptoms associated with a drop in estrogen will be experienced the most during the last 6 days of cycle. Normally the drop in progesterone will trigger a period, but women can also have an “anovulatory” or withdrawal period if they haven’t been ovulating.  In this case it is a drop in estrogen (often much later than 28 day cycle) which hasn’t been balanced with progesterone that eventually triggers a period, but can also increase the chances of heavy or dysfunctional bleeding. Since estrogen drives the thickening of the lining – too much estrogen (or not enough progesterone to balance) can lead to heavier periods and more clotting, while too low estrogen can lead to shorter and lighter periods. Too low and your period will stop altogether.

The hormone changes through the month also affect your body’s response to exercise?  The US Women’s Soccer team tracks their cycles and uses this information to adjust their training, possibly giving them a small advantage over other teams.

During the first half of the cycle women become more estrogen dominant with some testosterone, which makes them more anabolic.  This helps with growth and muscle building and uses more energy. During this time the body is more insulin sensitive, so it is more efficient at converting glucose to energy. The best exercise to support this is weight training and resistance exercises – making the first half of the cycle the best time to strength train.

During the second half of the cycle progesterone rises, which shifts the body to be more catabolic. This involves more breaking down (both fat & muscle) and producing energy – which can help with weight loss if you are active. The best exercises to support this phase are aerobic or cardio (running, swimming, biking).  You can burn up to 30% more fat when exercising during the luteal phase when both estrogen and progesterone are high and the body is more efficient at using fat for fuel.

How sensitive women are to the changes in their hormones depend on genetics and their general health (sleep, stress, exercise, nutrient deficiencies, etc). Birth control helps with managing these symptoms because it keeps the hormones more stable – there are smaller ups and downs over a month.

In my next post I will discuss the symptoms of estrogen and progesterone imbalance and some factors that may contribute. If you are interested in having a consult regarding your menstrual cycle and hormone symptoms, you are welcome to book an appointment with me!  See my Contact Me page for more info.